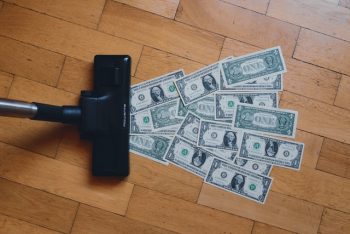 The onset of inflation has been one of the dominant stories in the press and financial markets over the past few months. You can see it everywhere, from the increase in the price of gas at the pump to the cost of food at the grocery store. After running for years at below 3 percent, it has reached around 7 percent, and its future course is uncertain.

What should investors do, and how should they react? Should they stockpile cash? Or should they strive to earn higher yields, buy commodities, or find another investment that beats out inflation? Do they sell stocks to protect themselves from the risk of recession or buy more to make up for the poor performance of bonds? Our core view is to remain long-term focused and not react to any short-term market dynamics. Stay diversified and hold on to your portfolio of stocks and bonds.

Let us also put things into perspective: In 2009, there were similar concerns about the economy’s direction and the possibility of inflation in the aftermath of the Great Recession. There was worry over how stimulus spending by the government and near-zero interest rates would lead to runaway inflation. And many investors were talking about a double-dip recession.

But in the years following the crash, the markets recovered, and to everyone’s surprise, rates (which did rise to some degree) still stayed historically low. Both stock and bond investors were rewarded for staying invested. It can “feel” logical that one thing will happen, a notion reinforced by the news media and sellers of financial products, but markets have a way of surprising investors.

The Role of Cash

Cash is an integral part of one’s finances, but it should rarely be a large portion of your wealth. It should be a reasonable emergency reserve; the exception is if you have an imminent cash need, like a child’s college education, home down payment, or extensive remodel. Cash should not be seen as a growth asset that is likely to appreciate over time. In the short term, it can protect you against the more volatile aspects of life (such as losing a job), but over time it diminishes in value due to inflation. It buys less and less of the same goods.

What Not to Do

During times of inflation, one of the key things to be wary of is “reaching for yield” – taking on more, often hidden, risk to generate a bit more income. In the current market, savers are not rewarded for depositing money in simple checking and savings accounts – yields have not budged and remain well below 1 percent. But the alternatives for so-called “safe” income are almost non-existent. CDs are earning historically low rates, even for longer-term maturities, and money market funds are likewise still yielding far below their historical norms.

One option many desperate yield-seekers consider are high yield bonds (AKA junk bonds), but they can sour quickly during difficult economic times. One can look to invest in real estate-related loans or buy income-generating properties, but then one gives up liquidity, and these markets are often subject to sharp market downturns. Or, to put it another way, your safe cash investment looks more and more like an at-risk investment, even though it is wrapped in the promise of just being a simple income investment.

And that is the reasoning behind mixing stocks and bonds in investment portfolios. The goal is to grow your portfolio in real (after inflation) terms over many market cycles. Bonds can be impacted by rising inflation, but over the longer term, as they mature, they are reinvested back into the portfolio at the new higher rates (bonds previously earning just 2 percent, once they mature and are reinvested, now earn 4 percent), and you end up earning more interest income. It is the silver lining that rewards the patient investor.

Bonds are not so much there to fuel long-term growth in isolation but are a vital part of a diversification strategy to help reduce downside volatility and provide support when markets are down and cash flow from monthly interest income.

Stocks, too, can be hit hard in times of inflation but, like bonds, can adjust and recover in short order. For example, the median inflation-adjusted return of US stocks over the two years following periods of high inflation was comparable to the two-year return following periods of lower inflation (18.5 percent vs. 18.7 percent, respectively). This highlights that investors with discipline and a longer time horizon need not worry about inflation’s impact on their portfolios.

At the heart of our investment philosophy is the belief that every investor needs a clear understanding of their risk tolerance and appropriate diversification between cash holdings, bonds, and stocks. Each element has its role within your financial planning strategy, and each has its strengths and risk factors.