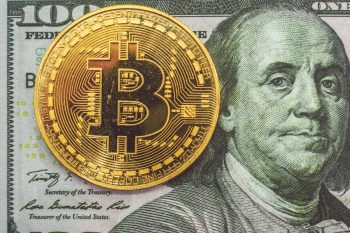 As wealth advisors, a frequent question my colleagues and I are receiving these days is this: should I buy Bitcoin?

The cryptocurrency marketing machine is currently hard at work, and if you watched even part of Super Bowl LVI, you were sure to have seen a crypto commercial. Not only were Super Bowl ad prices the highest yet this year ($6.5 million per 30 seconds), but there were six advertisements for cryptocurrency (compared to zero last year).

It’s difficult to avoid making the comparison to Super Bowls from the dot-com boom era: in 1999, two dot-com companies ponied up for their 30-second spots, and in 2000 that number had grown to 17. It is worth noting that one of those early dot-com companies, Pets.com, infamously fell victim to the dot-com crash just months after charming everyone with their sock puppet spokesman in their Super Bowl ads.

So when the “should I buy Bitcoin?” question comes up, my colleagues and I generally give the same answer: don’t invest a single penny more than you can bear to lose.

First, everyone is still working to understand cryptocurrency and its possible effect on markets. John Oliver, host of “Last Week Tonight,” described cryptocurrency perfectly: he called it “everything you don’t understand about money combined with everything you don’t understand about computers.” While this was, of course, meant to be a joke, there is a lot of truth there. Cryptocurrency is built on an incredibly innovative platform, blockchain, which may one day revolutionize how we interact with technology. But we just don’t know what we don’t know about cryptocurrency, and that, to me, is only one reason it doesn’t meet the standards we set for our investment portfolios.

A second reason is the instability of Bitcoin as an investment. To call Bitcoin volatile is a vast understatement. 2021 started off incredibly strong for crypto markets, rising to $63,000 in April, but by July, more than half of its value was wiped out, to $29,000, before skyrocketing back to all-time highs in November. This volatility gives me pause about what actual value cryptos can have when marketed as an alternative currency.

Every one of the Super Bowl cryptocurrency ads focused on the dreaded FOMO (Fear Of Missing Out), a behavioral bias that we often counsel investors to fight against to stay disciplined. This leads us to the third reason I advise caution when considering a Bitcoin investment. Since it has no inherent value (or its actual value has not yet been determined), it’s unclear exactly what you would be investing in, other than inflated theories that may or may not come to be, the most common that this is a new way to affect and facilitate transactions. How can such a volatile, speculative “currency” be used if it fluctuates in value so drastically?

In March of 2021, Tesla CEO Elon Musk announced that Tesla would begin accepting Bitcoin. Two months later, Tesla discontinued the practice, citing concerns about the sustainability of Bitcoin mining and its impact on the environment. I would wager that the price volatility had some effect on that decision. Bitcoin is currently priced at just under $42,000, but the demand for Bitcoin comes directly from the fact that the supply is finite – not because it necessarily has value.

4. Where is all this Energy Going?

A fourth reason that needs to be addressed is the massive environmental impact the act of mining Bitcoin has. The term “mining” refers to the creation of new Bitcoin. These facilities are not buried away in distant countries; most Bitcoin mining worldwide is done in the United States. These range from massive data centers with vast amounts of computing power down to individuals in their homes, all working to beat their competitors to verify and authenticate blockchain transactions and be rewarded with a new Bitcoin.

They are essentially solving extremely complex formulas as fast as possible and thus are incredibly energy-intensive. The Cambridge Bitcoin Energy Consumption Index indicates that Bitcoin mining uses more electricity per year than all of Denmark, Finland, or Chile.

As energy consumption by crypto mining approaches nearly 1% of global energy consumption, it begs the question: What are we expending all this energy for? A digital token that may have some intrinsic value one day in the distant future that we can speculate about the value of today? When you are invested in a company, for example (or group of companies, in the case of mutual funds), you actually own a piece of that company – ethereal ideas like its mission, vision, and values, but also more concrete things like its infrastructure and workforce.

From Cat Videos to the Metaverse

It’s no wonder that cryptocurrency companies are focusing so much money on advertising – with a finite supply of Bitcoin, the only way to increase the price is to drive demand through the roof. And these companies are appealing to our drive to “run with the herd” and dump a bunch of money in cryptocurrency.

But while I advise investors to only put as much money in crypto as they can stand to lose, I would absolutely advise them to also keep an eye on blockchain (the underlying technology of cryptocurrencies), which has the potential to revolutionize financial systems and other industries where the legitimacy of transactions and data must be guaranteed.

To return to the comparison to the dot-com boom and crash, the future of cryptocurrency is unknowable. During the early days of the internet, we watched cat videos and wrote blog posts, whereas now we are purchasing virtual real estate for a future in the metaverse. Back then, very few of us predicted how much the internet would affect every aspect of our lives. Likewise, the technology that cryptocurrency is built on has unlimited potential, but we just can’t know how it will actualize.

If you still are afraid of missing the crypto train, consider a small investment – but only as much as you can comfortably afford to lose.