If you were to look at the stock market, one would have a sense the American Economy is having a great year: The S&P 500 index, the most widely followed measure of how large companies are performing in the United States, has fully recovered from the initial shocks of the COVID-19 pandemic and is well above its pre-COVID-19 highs. Since its low on March 23, 2020, it has climbed 52% and is now showing a gain for the year of 5.6%, just off its all-time high.

HOW MUCH OF A DISCONNECT IS THIS WITH THE BROADER ECONOMY?

But this comes at a time when politics are unsettling, the pandemic is still spreading through many parts of the United States, and the unemployment rate is at an official 8.4% (after peaking at almost 15% in April 2020). So how did we get to this disconnect, where the markets appear to have recovered, while whole segments of the economy continue to feel the impact of the virus?

THE OUTSIZE INFLUENCE OF ONE MARKET SECTOR

If you look more deeply at the components driving the positive market performance, you will see a wide disparity between winners and losers, much more so than the benchmark numbers reveal in its headline numbers. On one end of the divide, there are the winners – which have primarily been technology stocks, some consumer goods stocks, and healthcare stocks; on the other end, there are energy, transportation, traditional retail, and hotel and leisure stocks.

The market always has winners and losers, but in this case, the winners have become so dominant that they have, in a sense, overwhelmed the broader market. The top five companies in the S&P 500 (Amazon, Apple, Alphabet (aka Google), Facebook, and Microsoft) make up 23% of the index as of September 30, 2020 (and they make up 31% of the Dow Jones Industrial index and 47% of NASDAQ). In effect, this means that a tiny minority of companies have an outsized influence on the overall market returns.

Another way to show this is that the year-to-date return for the S&P 500 index is +5.6%; if you take out the top five stocks, this overall market has declined by 3%. 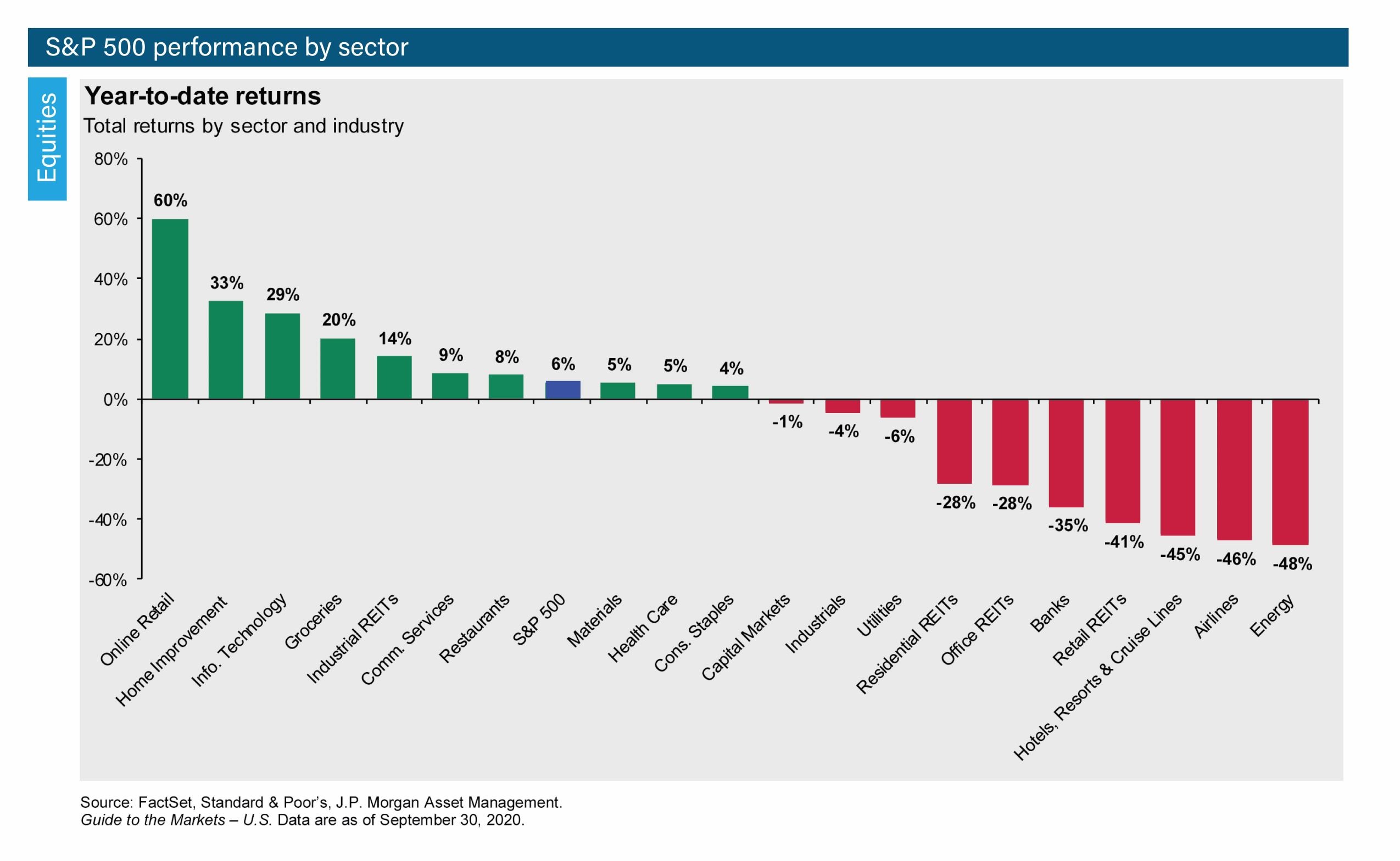 If you exclude those top five companies – all of which are tech-based plays to one degree or the other – the broader market is still down for the year. This explains away much of the disconnect between the markets and the economy. Tech has been a winner during the pandemic with record-breaking profits; it was perfectly situated to provide remote services while the rest of the economy had to experience a shut-down of unprecedented proportions.

The average return for the top five stocks has been 35%, while average return for the remaining 99% of the market was -5% (60% of all stocks in the index experienced negative returns over the period). And whole sectors of the market, including airlines, energy, financial and hotels, resorts, and cruise lines, are down by double digits since the beginning of the year.

Thus, when you start to look at it through this prism, the state of the market is representative of the economy. Whole sectors are down and have not recovered; others are at record levels.

Those few at the record level, because of their outsize influence, drive the positive returns for the overall market. We have also seen the S&P 500 index outperform the other major markets of the world. But if you exclude the top five US companies, you see that international large and small company stocks and emerging market stocks have outperformed the remainder of the US market. And in many ways, this makes sense: the US is still seeing growth in infections while China, other Asian countries, and broad parts of Europe, have had much greater success in slowing the rates of infection and have opened their economies to a much greater extent.

We continue to recommend that clients focus on longer-term returns and remain disciplined in the face of these unsettling times. In the short term, the markets run the risk of reacting to unexpected news and developments. Still, over the long term, they recover and have shown positive returns over an extended period. In the past 40 years, we have had four years where the US stock market declined by 30% or more (and the average decline in any given year is 14%); despite these drops, the market’s average return has been just under +9%. Thus, while it is tempting to react to the challenges seen in any given time, the rewards go to those who stay the course.