Despite a bumpy ride throughout 2014, the US economy gained pace while the US equity and fixed income markets outperformed most markets around the world. This performance came with higher market volatility in the US, a rallying dollar, slowing economies in Europe and Asia, and rising geopolitical tensions, including conflicts in Ukraine and the Middle East. 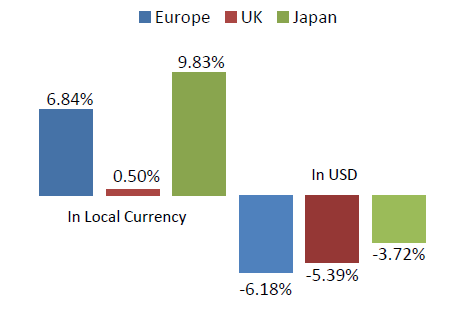 Although 2014 proved to be a difficult year for US investors of foreign stocks, it remains essential to hold meaningful exposure to foreign developed and emerging markets. Just as these companies are critical to the long-term success of the global economy, they are equally important to the success of a long-term investment strategy.

In any given year, a single asset class can outperform all other asset classes by a wide margin. 2014 proved to be one of those anomaly years, where the US Large Cap stocks have outdistanced all other major asset classes.

Since a simple portfolio of US large stocks and bonds did well in 2014, should we abandon the diversified portfolio for a simpler 2-Asset Class model in 2015? If history can tell us anything, it favors by a wide margin, the more fully diversified mix of assets. 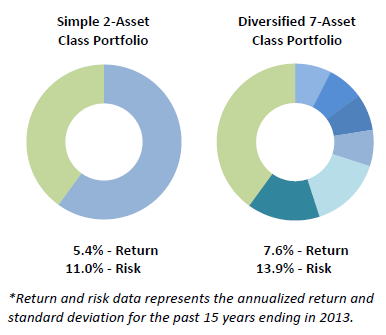 The economy showed signs of weakening in early 2014, with Q1 GDP growth reported at an annualized 2.9%. In Q2, GDP rebounded strongly at a 4.6% annual growth rate—the highest since 2003. Growth in Q3 was even stronger at 5%, capping its best six-month stretch since 2003 and reaching the highest annualized growth rate in 11 years.

A host of indicators pointed to improving conditions during the year, including:

Declining Oil Prices
Oil prices fell by almost half during 2014, a victim of excess supply due to rising production—particularly in the US, where production soared to its highest level since 1986—and to weakening demand from the economic slowdown in Europe and Asia. In the US prices dropped from $107 per barrel in June to just over $53 at year-end. The price decline most affected the economies and currencies of oil-exporting countries, especially Russia.

Soaring Dollar
In 2014, the US dollar rose against the currency of every developed market. Overall, it gained 12.5% against a basket of widely traded currencies, measured by the Wall Street Journal dollar index. This was the dollar’s best gain since 2005 and second-best on record. The rise was attributed to stronger US economic data, falling global oil prices, expectations of higher interest rates, and weakened currencies resulting from monetary easing by the Japanese and European central banks.

Weak Inflation
Despite rising to an 18-month high in May and June (2.1% each), average US inflation remained low throughout 2014. In November, year-over-year inflation fell to 1.3%. Since rising inflation is normally viewed as a sign of an economic uptick, some believe that weak inflation influenced the Fed’s decision to not raise interest rates in 2014.

The improving US economic indicators are already reflected in the strong double digit performance of last year’s stock market. Of course, the investment returns for 2015 will be impacted by new and unknowable economic data and global events.