As the world of sustainable investing opens up – as more investment options become available, as more investors become aware of its promise and money flows in – one has to ask the question: does my investment dollar really help to make a difference? Does Sustainable Investing really help bring about change and lead (or force, in some cases) companies to behave in a way that is truly more “sustainable”? And, can we still drive for economic growth in the present with a high degree of consideration for the future?

The short answer is yes, it is pushing change and it is bringing about a shift in how companies are behaving and planning for the future.  And much of this change has been driven by a loose coalition of investors, nonprofits, and private entities that are dedicated to pushing for more sustainable behavior from the corporate world. It is still a work in progress and much needs to be done for investors to have a validated sense that that their dollar is providing support for a more sustainable version of our world – one where the needs of the present are met without compromising the ability of future generations to meet their own needs.

There are three factors that are leading this change:

It’s Not a Dollar. It’s a Ballot

In a 2017 survey, Morgan Stanley published that over 70% of investors were “interested in investing along sustainability lines,” with over 80% of millennial and female investors and 60% of white male investors voicing support. In 2012, there was a total of $3.74 trillion invested under sustainable mandates in the United States; in 2018 there was $12 trillion – a fourfold increase in six years. It is now estimated one out of every four professionally managed dollars in the United States is invested with consideration for sustainability. And this has only continued to increase in the passing year, with record flows coming in during one of the worst drawdowns in US investing history:

Much of this has been driven by the notion that one’s investment dollar can help nudge the corporate world toward change on a broad range of environmental and social issues. Investors are pushing corporations to focus less on a short–term and bottom-line only approaches and more on longer–term goals that consider a wide number of environmental and social issues. The cumulative impact of this money has shown to the investment world and corporations that this is a force to be reckoned with.

As a reflection of the rising demand, there has been a significant increase in the number of funds that both explicitly focus on sustainable investing or at least now “consider” sustainability factors in their decision–making process.  In the US alone there are now more than 300 dedicated sustainability funds and another 564 that consider environmental, social, and governance (ESG) factors (up from just 81 in 2018). BlackRock, the world’s largest fund manager, recently announced their strong support of sustainable investing, with a commitment to “place sustainability at the center of our investment approach.” Every sustainability fund has its own focus and its own methodology of how it invests and how it votes its dollar. There are funds that screen out specific business sectors or types of companies that profit from areas they deem undesirable. This is where much of the industry started – with funds that excluded companies operating in apartheid South Africa or by religious groups in companies they deemed to act contrary to their core beliefs e.g., use of tobacco, alcohol, exploitive labor practices, manufacture of munitions, etc..

Others sustainability funds are more nuanced in their approach: while they might not like a particular sector, they will include companies who are making material changes to how they operate and plan for a more sustainable future. They focus on best in class companies and are more inclusive. Having said that, they can and will exclude any number of worst in class companies or sectors they believe do not fit in with the overall vision.

Many sustainability funds also vote shares in support of environmental efforts or any number of social issues (e.g., improving hiring and pay practices around racial and gender diversity). Some companies are more explicitly aggressive – they can push ballots to vote on these issues that the board or the company do not necessarily support – or they can be relatively supportive of management and work with them to create change over the longer term. The thought here is that if you have a positive relationship with the board and management you are more likely to get them to accept change over the long term versus a more confrontational approach.

This aspect of sustainability funds is still a work in progress and funds across the spectrum are becoming more vocal and active in their efforts to promote sustainability. In the past, most funds were hesitant to become involved in issues surrounding board votes as they did not see their role to vote on represent their investors in corporate matters, but this tradition is evolving quickly.

To help support the investment process, a strong ecosystem of nonprofit and for–profit entities have been created to define and track how well companies are engaging with their sustainable practices. Organizations such as Sustainability Accounting Standards Board (SASB), Global Reporting Initiative (GRI), and International Integrated Reporting Council (IIRC) are nonprofit organizations that help set uniform and consistent standards on how companies report material environmental information to investors. Thousands of companies now report to these standards, including almost 95% of the largest 250 companies in the world. The establishment and widespread acceptance of these agencies has led to a dramatic increase in the depth and breadth of information available to outside parties and investors. This is still a work in progress, as much of the data is still of uncertain quality and can often provide conflicting results between providers. But it is improving and all of the major players are beginning the process of working together and coordinating their efforts.

These standard–setting organizations are then used by independent, third party firms (e.g., Sustainalytics, TruCost, MSCI, etc.) who score companies on key sustainability metrics; these scores are then used by investment managers in making investment decisions. Without these resources, investment managers would not be able to effectively monitor and vet across a wide range of industries and companies. Other nonprofit organizations (Ceres, CDP, PRI, Greenpeace, Oxfam, among others) create a wide range of resources that assess the performance of global companies against sustainability targets and benchmarks and help push for change. As stated by the environmental disclosing agency CDP, in 2020, 515 investment groups with $106 trillion in assets requested companies report their environmental data. 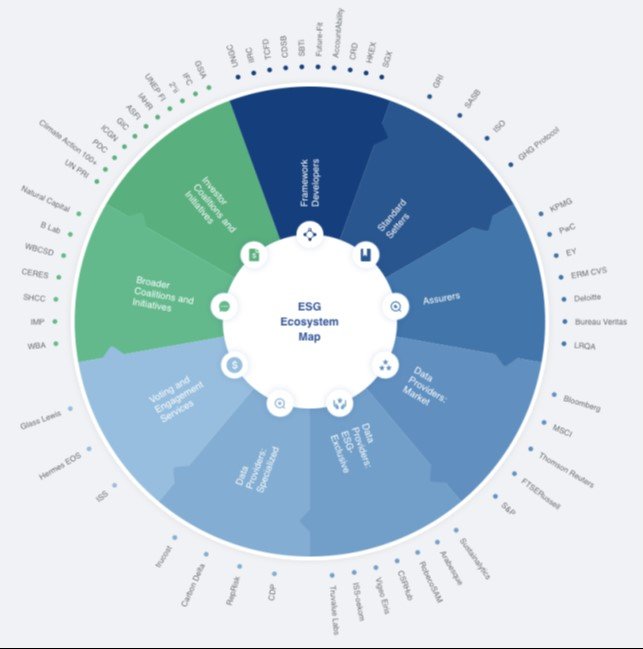 Companies are Seeing the Light

In turn, many companies have acknowledged the importance of reporting and focusing on sustainability initiatives and investments. Indeed, for companies in the United States and across the globe, sustainability factors are now a part of their daily and long-term decision-making process. And this is not mere greenwashing, where companies tout their commitment to change through slick public relationship moves but do little else to effect change; instead they are making deep changes to how they operate and they are seeing it as a benefit to their bottom line.

When environmental disclosure organization CDP began asking companies for climate data in the early 2000s, it received responses from only 228 companies; by 2019 this figure had risen to 8,446 companies. Over the long-term, the progress made has dramatically shifted corporate disclosure practices. As a result, today’s investors are far more conscious of climate risks and opportunities and can therefore engage with companies to better manage these issues.

Growth in Disclosing Companies Since 2003 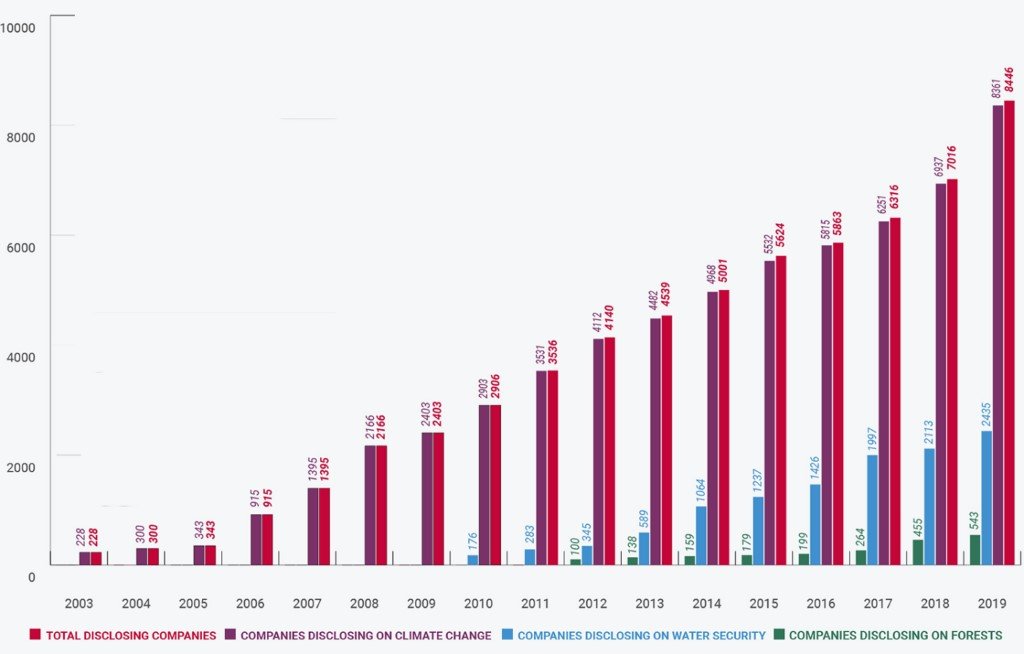 And investment managers and investor advocacy groups are getting more involved at the shareholder level and pushing for change. A record of 140 climate–related shareholder proposals were filed in the 2020 proxy season (which wrapped up this summer). Of these proxy votes, a record number of them achieved a majority vote and the percentage of approval votes on those ballots reached a record high and a significant jump from 2019 (up 17% year–on–year). And importantly, when looking at the end goals of these resolutions, 56 proposals, or a meaningful 40 percent of those filed, were withdrawn by the investor filer in return for a commitment by the company to address the issue raised in the proposal. Organizations such as As You Sow and Climate Action 100+, representing coalitions of investors, are taking the lead in coordinating efforts on these actions.

Dimensional Fund Advisors (DFA) announced just this week that they sent notices to 54 companies about their political contribution disclosures (that were in conflict with the companies’ stated ESG goals). Of those 54, 27 engaged with them, 14 updated disclosures or made changes recommended by DFA, and the ones who did not engage had ESG scores lowered or put on a short-list.

As the data table below on 2019 proxy votes by asset managers shows, two of the Big Three voted against nearly 90% of climate-related shareholder proposals. And the third, State Street, voted “For” only 19%. So, it is easy to see that if the largest index fund providers had voted “For” more climate-related proposals, the votes on these proposals would be far higher.

Ultimately, the view is now being held, by both investors and companies alike, that taking sustainability factors seriously is good for business and good for shareholders. As stated by McKinsey in an extensive study they did of corporate commitment by corporations, considering environmental, social, and governance issues provides for:

And there are other issues that drive this change: companies do not want to be seen as bad players in the broader world. The cost to their reputation and ultimately to their bottom line, can be too great to risk. This change has led a movement that is described as a ‘race to the top’ where companies are now trying to act and position themselves as leaders in sustainability practices.

Companies still want to make a profit, but the push of investors who are making real world investment choices concerning who they want to support is driving change. As a result, more consideration and more action are being put into enacting sustainable business choices. For them, it is about the survival of their businesses and, ideally, the world. 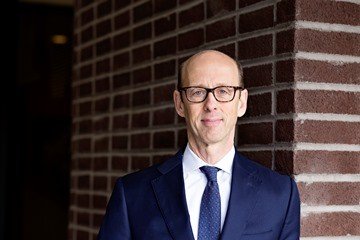