A Tale of Two Decades: Lessons for Long Term Investors

The first decade of the 21st century, and the second one that’s drawing to a close, have reinforced for investors some timeless market lessons: returns can vary sharply from one period to another; holding a broadly diversified portfolio can help smooth out the swings; and, focusing on known drivers of higher expected returns can increase the potential for long-term success. Having a sound strategy built on those principles—and sticking to it through good times and bad—can be a rewarding investment approach.

Looking at a broad measure of the US stock market, such as the S&P 500, over the past 20 years, you could be forgiven for thinking of it having a split personality – one bad and the other good. (see Exhibit 1). 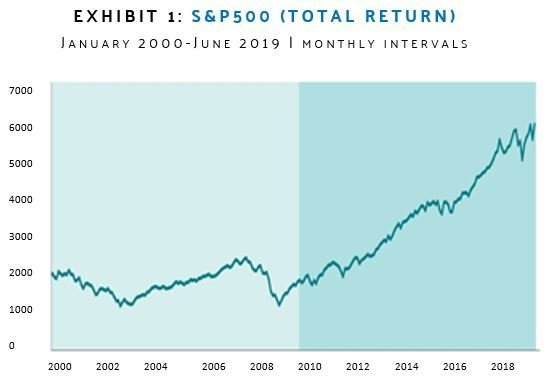 For US large company stocks, the bad came first. The “lost decade” from January 2000 through December 2009 resulted in disappointing returns for many who were invested in the securities in the S&P 500. An index that had averaged more than 10% annualized returns before 2000 instead delivered less-than-average returns from the start of the decade to the end. Annualized returns for the S&P 500 during that market period were −0.95%.

Yet it was a good decade for investors who diversified their holdings globally beyond US large company stocks and included other parts of the market with higher expected returns—companies with small market capitalizations or low relative price (value stocks). As Exhibit 2 shows, a range of indices across many other parts of the global market outperformed the S&P 500 during that time span. 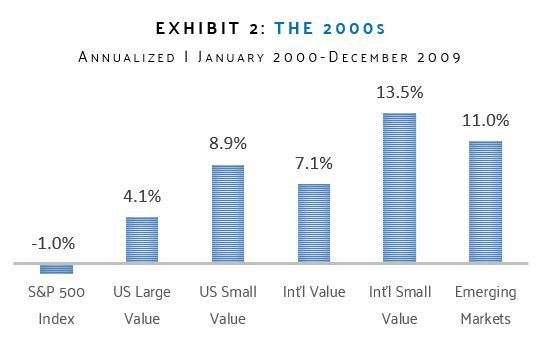 The next period of nine-plus years reveals quite a different story. It has looked more like the best of times for the S&P 500, as the index, when viewed by total return, has more than tripled since the start of the decade in the bounce-back from the global financial crisis. US large company growth stocks have been some of the brightest stars during this span. Accordingly, from 2010 through the first half of 2019, many parts of the market that performed well during the previous decade have not been able to outperform the S&P 500, as Exhibit 3 displays. 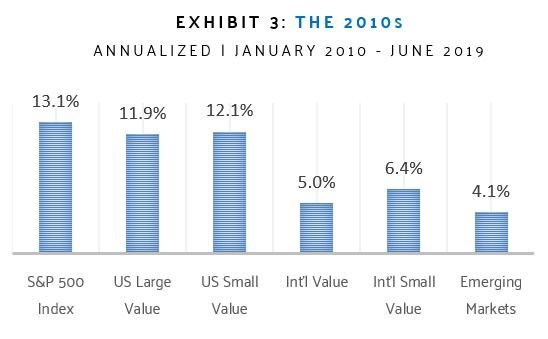 Since many of these asset classes have not kept pace with the S&P 500, these returns might cause some to question their allocation to the asset classes that drove positive returns during the 2000s.

THE CASE FOR GREAT EXPECTATIONS

It has been stated many times that investors may want to take a long-term perspective toward investing, and the performance of stock markets since 2000 supports this point of view. Over the past 19½ years (see Exhibit 4), investing outside the US presented investors with opportunities to capture annualized returns that surpassed the S&P 500’s 5.65%, despite periods of underperformance, including the most recent nine-plus years.

Cumulative performance from 2000 through June 2019 also reflects the benefits of having a diversified portfolio that targets areas of the market with higher expected returns, such as small and value stocks. And it underscores the principle that longer time frames increase the likelihood of having a good investment experience.

No one knows what the next 10 months will bring, much less the next 10 years. But maintaining patience and discipline, through the bad times and the good, puts investors in position to increase the likelihood of long‑term success.