10 REASONS TO BE CHEERFUL

Do you ever listen to the news and find yourself thinking that the world has gone to the dogs? The roll call of depressing headlines seems endless. But look beyond what the media calls news, and there also are a lot of things going right.

It’s true the world faces challenges in many areas, and the headlines reflect that. But it’s also easy to overlook the significant advances made in raising the living standards of millions, increasing global cooperation on various issues, and improving access to healthcare and other services across the world.

Many of the 10 developments cited below don’t tend to make the front pages of daily newspapers or the lead items in the TV news, but they’re worth keeping in mind on those occasions when you feel overwhelmed by all the grim headlines.

So here’s an alternative news bulletin:

No doubt many of these advances will lead to new business and investment opportunities. Of course, not all will succeed. But the important point is that science and innovation are evolving in ways that may help mankind.

The world is far from perfect. The human race faces challenges. But just as it is important to be realistic and aware of the downside of our condition, we must also recognize the major advances that we are making.

Just as there is reason for caution, there is always room for hope. And keeping those good things in mind can help when you feel overwhelmed by all the bad news. 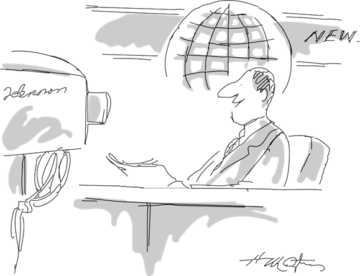 “… And on Wall Street, the markets generated another
exciting day’s worth of meaningless white noise.”

After years of deliberation, the U.S. Department of Labor (DOL) has released a final rule clarifying the term “fiduciary” as it relates to financial and investment advisers and spelling out when conflicts of interest arise relating to retirement plan advice.

To be crystal clear, Willow Creek has always acted as a fiduciary in the pursuit of our clients’ financial success – And we take this responsibility very seriously. Many financial professionals, however, including insurance agents, commission-based stockbrokers, broker-dealers and others, have not been held to the fiduciary standard – until now.

So what does this change really mean? To us, it’s just good common sense – looking out for every clients’ “best interest” and disclosing any situations where potential conflicts of interest may exist.
It’s been estimated by the DOL that backdoor payments and hidden fees (often buried in the fine print) are hurting mostly the middle class, with about 1% lower annual returns on retirement savings and $17 billion in losses every year. The new ruling could save families with IRA’s more than $40 billion over the next 10 years.

Though the DOL rule doesn’t go so far as to ban commissions or revenue sharing, it will require advisors to have clients sign a best interest contract exemption (BICE). The BICE pledges that the advisor will act in the client’s best interest and only earn “reasonable” compensation. The exemption also must disclose information to clients about fees and conflicts of interest that could affect their best judgement as a fiduciary giving advice.

The DOL rule will have a significant impact on financial advisors who sell variable annuities and indexed annuities in qualified accounts. As a result, sales of these high commission annuity products are expected to slow. It’s been estimated by insurance coverage group Keeve, Bruyette, & Woods, that sales of variable and indexed annuities within qualified plans could fall between 25% to 50%, which would equate to a sales decline of about 15% to 35% overall. This small loss for insurance companies is a huge win for the consumer.